The Team Saints – an advanced boys and girls’ basketball program since 2009 based out of Derry, NH – is an independent organization that provides the highest level of competition for boys and girls at the Elementary, Middle School and High School level in the southern and central New Hampshire region.

The Team Saints have a strong experienced program that will offer the most competitive play to the top players in the region offering the best opportunity to prepare them for High School and Collegiate play.  Some of the benefits uniquely offered by Team Saints compared to other competing organizations are:

This program was founded to provide young, gifted players with the best basketball training and experience possible. Through its solid reputation, Team Saints has built a large following of players seeking the best opportunity to refine their natural talents. We honor the High School programs and want to provide the greatest outreach for training possible. 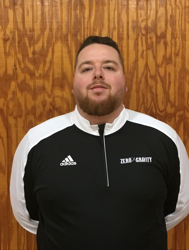 David’s basketball experience started at Trinity High School. He played for the 2003/2004 varsity team that was ranked nationally and won the Hooters Holiday Shootout in St. Petersburg Florida. He went to the semi-finals in 2003/2004 and quarter-finals in 2004/2005. His varsity Head Coach was Frank Alosa, who also coached him on his Granite State Raiders AAU team (a team that spawned Matt Bonner and several other Division I, II, and III players). He coached the Pembroke Academy High School as Junior Varsity Head Coach and was also the Varsity Assistant Coach from 2013-2014. The Pembroke Academy Varsity team went 25-0 and won the NHIAA Division 2 Boys State Championship.

He went on to play college basketball at NHTI and was coached there by Paul Hogan (prior head coach of Plymouth State). He has also instructed at several basketball camps around the state. He is a seasoned basketball player and will use gained knowledge and experience he picked up from his past great coaches to help make the Southern New Hampshire Saints players the best basketball players they can be.

Laura earned a B.S. in Kinesiology (2007) and a M.Ed. in Secondary Education (2008) from University of New Hampshire. From her education, she transitioned into a teaching position as a Wellness teacher at Bedford High School. In her time there she was able to work with a fantastic professional learning community in constantly restructuring curriculum, advising several clubs (Key Club, National Honor Society and starting the Superfan Club), coach Junior varsity Girls lacrosse, and be a site supervisor at many athletic events.

After six wonderful years at the school, she moved on to pursue a management role in the sports world by pursuing a second master’s degree while working at SNHU; MS in Sport Management with a graduate certificate in Athletic Administration. While at SNHU, she was connected with the Team Saints May of 2016 and has been with them ever since. In her time away from Team Saints, she is a Physical Education and Health Education teacher, as well as an adjunct professor with SNHU.